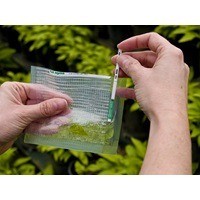 The Maize chlorotic mottle virus ImmunoStrip is an on-site tool to quickly detect the presence of MCMV in corn.

Maize chlorotic mottle virus (MCMV) is a Machlomovirus that can cause stunting, chlorotic stripes, and leaf necrosis in corn. MCMV is a major concern to corn producers because of its contribution to Maize Lethal Necrosis Disease (MLND). MLND is caused when corn is co-infected with MCMV and a Potyvirus such as Sugarcane mosaic virus (ScMV). MLND has more pronounced symptoms and can result in significant yield loss to a crop. African corn growing regions, where food production is vital, have been devastated by the disease in recent years.

The test requires no equipment or expertise to run. Results are obtained in as little as a few minutes making them perfect for use in the field or greenhouse. It can also be used in conjunction with Agdia's Poty ImmunoStrip, using the same sample extract, to determine if a plant is co-infected with both MCMV and a Potyvirus.